Coverage of the Scottish referendum on Thursday evening/Friday morning will be widespread of course, so it may be worth a quick note on what we are looking for through the night (all times UK).

Note the times are necessarily mere estimates, and perhaps slightly optimistic ones. Delays in transferring boxes, queries over verifications or any recounts (which may only be requested at the local venue) could delay them.

2200: Polls close (although those still queuing may still vote). The broadcast networks are not conducting an Exit Poll, so in fact we will know little at this stage.

Ultonia Communications will at this stage tweet a final call based on social media ‘sentiment analysis’ – note, however, that this is a trial and is far from perfected, and has in testing thus far proved marginally less accurate that the average poll. 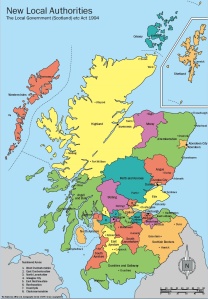 Votes will be counted by each of the 32 local authorities

With over 6% of the electorate, both Lanarkshires are areas “Yes” should win (albeit narrowly) if it is to win overall. Smaller declarations (in descending order of likely yes” vote) are also due to come over the hour from Clackmannanshire, Perth/Kinross and Moray with a likely majority for “Yes” (although the latter two have wild variations in polling); Inverclyde, which is a toss-up if it’s close; and East Lothian and Orkney for “No”. Depending on the weather, we may also have a declaration from the Western Isles (Na h-Eileanan Siar) at any time, for “yes”.

Similar to the above, South Lanarkshire should be a win for “Yes” if it is to win overall. The same probably applies to the slightly smaller Aberdeenshire, although with regional discrepancies a “Yes” win here is not essential provided it is scoring well in the West. Smaller declarations over this half-hour are likely from Angus, Dundee, Falkirk and Stirling for “Yes”; Renfrewshire and East Ayrshire which are toss-ups if it’s close; and East Renfrewshire for “No”.

0330: Another raft of smaller declarations due around this time from Midlothian and West Lothian which should be just for “Yes” if it’s close; and Argyll/Bute, South Ayrshire, East Dunbartonshire and Shetland for “No”.

“Yes” should be ahead at this stage if it is to win.

Fife at over 7% of the electorate is really a toss-up. Highland is also a large declaration likely at this time just for “No”, and North Ayrshire should follow soon after as a toss-up (really “Yes” would want to win it if it’s close).

“Yes” should still be ahead at this stage if it is to win.

With over a fifth of the electorate between them, Scotland’s two largest cities and their margins could be critical if it is still close, and they will likely come towards the end. For “No” to win, it will need to win Edinburgh relatively comfortably. For obvious reasons, both sides need to be at least close in Glasgow. Scottish Borders should also declare for “No” around this time.

It is possible the winner will now be declared.

Aberdeen with over 4% of the population could decide it right at the end if it is a cliffhanger! It should narrowly favour “No” all other things being equal – but remember the rules are very simple, all that matters is the overall score across Scotland, so if it is close “No” may need to win by a particular margin.

Unless it is incredibly close, the winner should now be declared.

0700: All being well, we will have the final result by this time, probably from Dumfries/Galloway for “No”. If it is incredibly close, “No” could expect just over 60% here if it needs it.

Thanks to BBC Scotland, Number Cruncher UK and Credit Suisse for estimates, and ScotCen for further information

Error: Twitter did not respond. Please wait a few minutes and refresh this page.